Contact movement is though electrostatic attraction, with the necessary voltage generated by an integrated charge pump.

Also integrated is control logic for connection to a hose microcontroller through SPI bus (33MHz) and GPIO.

The logic needs a 5V supply, and consumption is the hundreds of microamps to 1mA region. Operation is over -40 to 85ºC. 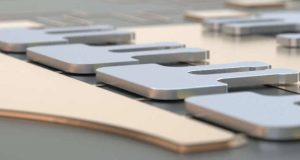 In the image (left), the second contact is in the relaxed open-circuit position, the others, hardly different visually, are pulled down by electrostatic attraction to make contact. 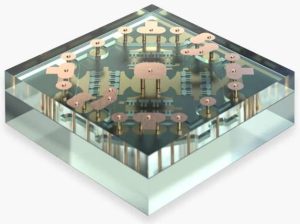 The parts use custom metal alloys and are made on 200mm wafers using a 14 layer process – the final structure is in a hermetic ‘through-glass via’ package (example right).

A 50 x 50μm switch cell is being used, which operated in ~10μs. Linear performance from DC to >50GHz is claimed for the switch mechanism.

The company is headquartered in Irvine California, and has just announced $150m in Series C funding – taking the total to >$225 million. Vertical Venture Partners and Tony Fadell’s Future Shape led the round. Menlo is exploring manufacturing locations in California, New York, Texas and Florida.