That robot finger with living skin


The result, demonstrated on a robot finger, self-fits to the underlying structure, is flexible, soft to the touch, and shows some self-healing properties.

A 3D printed three-jointed finger, later operated by nylon threads running through it, was used as a scaffold for ‘skin’ growth – growth which was spread over several steps and more than two weeks: 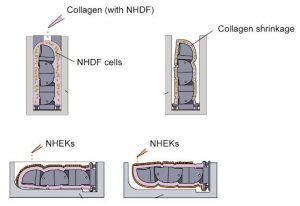 Firstly, the under-layer or ‘dermis-equivalent’ was initiated inside a vertical mould (diagram left), by pouring a collagen solution containing what the research team refers to as ‘NHDFs’ – for ‘normal human dermal fibroblasts’ – over the finger mechanism.

Three days held in a warm environment gave the collagen and fibroblasts, which are two of the main components of human skin connective tissue, time to form a hybrid structure where fibroblasts spreading through the cross-linking collagen matrix layer. As it integrated, it shrank tightly onto the surface of the printed finger.

The second step involved pouting a solution containing ‘NHEKs’ – ‘normal human epidermal keratinocytes’ – over the back of the finger, now held horizontal, and then a day later over the front of the finger. Keratinocytes are a major constituent of the outer layer of human skin.

During the following two weeks of incubation, the keratinocytes proliferated through the other materials, and the skin-equivalent self-assembled, becoming stronger as time elapsed and developing a water-shedding outer surface.

The self-repair technique was inspired by medical treatments for burns that use grafted hydrogels.

It involved placing a plain collagen sheet over a wound in the skin-equivalent, into which fibroblasts migrated over the following week, until the boundary was no longer distinct.

The proof-of-concept skin has some of the self-assembling and self-maintaining characteristics of living skin. While not as strong as human skin, it was robust to repeated flexing. Despite a dense and water-shedding top surface, the skin-equivalent could not be left out in the air for long periods and had to be kept wet between experiments.

The team is intending to add further types of cells to reduce limitations and increase function.

The above is a huge simplification of a complex process, covered fully in the detailed paper ‘Living skin on a robot‘, published in Matter, which can be read in full without payment.